Posted on March 7, 2014 by thegardenmaiden

With all of the yard work I have been doing the last couple of months, it was nice to see some things blooming even though its still winter. One of my favorite things about living on the Gulf Coast are the “winter bloomers”. Although this was by far the coldest of the three winters I have been here, some things were still putting on a show despite the cold and ice, yes ice!

The camellias started blooming in December and continued all winter. (there are still some buds out there)

This little fragrant gem is Daphne odora that I purchased at the Birmingham Botanical Gardens.  It has been blooming for three weeks.

I have several varieties of Narcissus planted in a bed around a river birch. The bed was already there when I moved into the house.  I cannot remember what the species or variety is and I would rather not guess, than to be incorrect.  I labeled them at planting, and, gulp, the names faded from the plant labels. This winter I “found” some Narcissus growing near the shaded fence in my back yard and I plan to move them to a sunnier location so they will flower next year. (Don’t you love “finding” plants someone else planted at your house previously?) 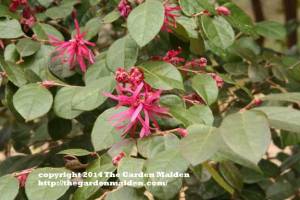 Two weeks ago the first flowers opened on my hedge of Loropetalum. It isn’t peaking yet, but when it does, it will be glorious! Clemson University has a nice little fact sheet on this flowering shrub. Did you know it is in the witchhazel family (Hamamelidaceae)? 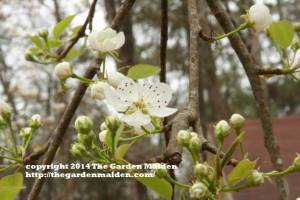 A spot of lavender surprised me yesterday when I was walking through the garden. This is a plant which I did not know existed in my garden. Sometimes, after moving into a new home, environmental conditions such as stress (such as drought), light, and temperature can prevent emergence or flowering and so some plants go undiscovered until the conditions “right” themselves. This is my third spring here and I am still “finding” things. I believe this specimen to be a member of the lily family in the genus Chionodoxa (glory of snow). You can purchase and read about it from Brent and Becky’s Bulbs. 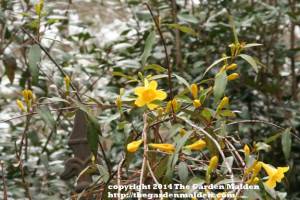 My final flower of the week is one of my favorite native plants! Carolina jessamine (Gelsemium sempervirens). Read more about this native, flowering vine on the Lady Bird Johnson Wildflower Center. I have two plants purchased from The Crosby Arboretum: one near my patio and one at my mail box. I prune both to keep it in bounds and to encourage more flowering. You can see this plant blooming along our highways, often growing high up into the tree canopy and creating an affect of twinkle lights.

Well, that’s it for the week folks! I’ve got to get outside and do some raking and pruning.

All images and text copyright 2014 The Garden Maiden

This site uses Akismet to reduce spam. Learn how your comment data is processed.

The Garden Maiden’s Tales from the HORT Side

The Garden Maiden’s Tales from the HORT Side

"You can't conserve what you haven't got." - Marjory Stoneman Douglas "What is a weed? A plant whose virtues have never been discovered." - Ralph Waldo Emerson "I don't like formal gardens. I like wild nature. It's just the wilderness instinct in me, I guess." - Walt Disney

Working to inspire and educate Mississippians to take action everyday to impact, improve, and beautify their community environment.

Wild flowers from The Forest of Dean

A garden is good for both body and soul

In the Garden with Arkansas Extension Horticulture

Welcome to In the Garden with Arkansas Extension Horticulture, a blog about gardening in Arkansas.